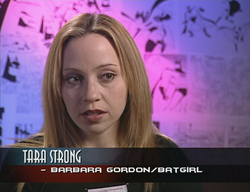 Tara Strong (née Charendoff, born February 12, 1973 in Toronto, Ontario) is a Canadian-American voice actress best known for her role as Bubbles in The Powerpuff Girls, Dil from Rugrats and All Grown Up!, Timmy Turner in Fairly Odd Parents, Raven in Teen Titans, Ben Tennyson in Ben 10, and Twilight Sparkle in My Little Pony: Friendship is Magic. She was the third voice of Batgirl in the DC Animated Universe, following from Melissa Gilbert and Mary Kay Bergman.

Due to the retirement of Arleen Sorkin, she portrayed Harley Quinn in the video game View-Master Batman Animated VR.

Other than her role as Raven, Tara Strong provided the voice of several other characters in Teen Titans: Gizmo, Jinx (both were first voiced by Lauren Tom), Kole, Elasti-Girl and Kitten. She also appeared as Vicki Vale in the non-DCAU animated movie The Batman vs. Dracula, as Emerald Empress and Alexis in Legion of Super-Heroes, as Katma Tui in "The Green Loontern" (an episode of Duck Dodgers), as Alexa in Wonder Woman, Huntress, Billy Batson, Mary Marvel and Georgia Sivana in Batman: The Brave and the Bold, Serling Roquette in Young Justice, and Iolande in Green Lantern: The Animated Series. Strong also reprised her DCAU role as Batgirl in Super Best Friends Forever, and as Barbara Gordon in Beware The Batman. In video games, Strong voiced Harley Quinn in Batman: Arkham City and Arkham Knight, due to Arleen Sorkin's retirement as the character, as well as Harley Quinn and Raven in Injustice: Gods Among Us.

She is also a childhood friend of fellow Canadian voice actress Cree Summer.