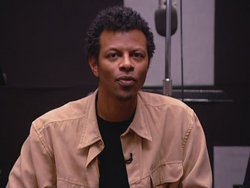 Phil LaMarr (born January 24, 1967 in Los Angeles, California) is a prolific American actor, voice actor, comedian and impressionist who has voiced many roles in the DCAU.

Among his live appearances in film, he gained minor notoriety for his appearance in Pulp Fiction as Marvin, an ill-fated, low-level gang peon whose head is inadvertently blown off by Vincent Vega, played by John Travolta.