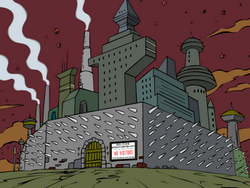 Oblivion Intergalactic Correctional Facility is a high security prison. According to Utne Reader, it is "A felon's worst nightmare!"

Utne Reader founded Oblivion so that felons will have their worst nightmares. The rules are very strict and disobeying the rules result in a form of punishment known as The Hole. Oblivion is now run by the Snake who ate Mudboy after the Porkan got out of jail. Lobo was asked by Sniff to break his brother Slaz out of Oblivion. He eventually succeeded, though Major Snake and many guards were killed.

Retrieved from "https://dcau.fandom.com/wiki/Oblivion_Intergalactic_Correctional_Facility?oldid=176777"
Community content is available under CC-BY-SA unless otherwise noted.