Oa is the planet at the center of the universe, home to the Guardians of the Universe and headquarters of the Green Lantern Corps.

The Guardians built the Manhunters on Oa, but soon decommissioned them.

Oa was seemingly destroyed by Amazo, but was actually sent to another dimension by it, claiming it was in its way as it was returning to Earth. At John Stewart's request, Amazo brought it back. 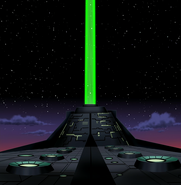 The Citadel on Oa

The Guardians' Council Chamber
Add a photo to this gallery

Retrieved from "https://dcau.fandom.com/wiki/Oa?oldid=176775"
Community content is available under CC-BY-SA unless otherwise noted.