Melissa Gilbert (born May 8, 1964 in Los Angeles, California) is an American actress best known for her role in the television series Little House on the Prairie. She voiced the role of Barbara Gordon in Batman: The Animated Series. Gilbert was unable to reprise the role of Batgirl in The New Batman Adventures and was replaced by Tara Strong. 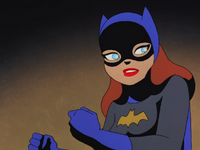 Retrieved from "https://dcau.fandom.com/wiki/Melissa_Gilbert?oldid=182890"
Community content is available under CC-BY-SA unless otherwise noted.