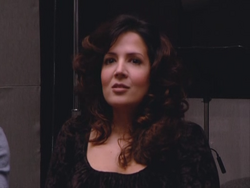 Born to Cuban parents in Miami, Florida, Canals received her Theatre degree from the University of Miami and appeared in several stage productions in both Miami and Los Angeles, including Change of Heart at the Mark Taper Forum. Other stage work includes roles in Chilean Holiday, Hedda Gabler, A Touch of the Poet, Mixed Blessings, The House of Blue Leaves and The Glass Menagerie.

She made her network television debut in the 1993 TV series Key West and has appeared in such films as America's Sweethearts, The Master of Disguise, and My Family (Mi Familia), with Edward James Olmos, Jimmy Smits and Esai Morales.

She won an ALMA (American Latino Media Arts) Award in 2002 for her work on the television series Brothers Garcia, and has also worked on the Telemundo series Marielena and Corte Tropical for Univision. Canals was the Female Lead on The Tony Danza Show, and she's had guest-starring roles on Curb Your Enthusiasm, George Lopez, The Loop, Popular, Veronica's Closet, Caroline in the City and Almost Perfect, as well as recurring roles in Beggars & Choosers for Showtime and the PBS series American Family.

Her most recent work is as Theresa Russo, the mother to a trio of magically-gifted teenagers, on The Wizards of Waverly Place. She is also slated to appear in Disney's original movie Camp Rock.

Canals is married to actor David Barrera, with whom she has two children. She is now usually credited as Maria Canals-Barrera.

On the special feature Voices of Justice, she commented that she loves voice-over work because of the challenge of conveying everything with only her voice.

In response to a question from Phil LaMarr whether playing a superhero requires her to act differently than in a normal role, she joked "You always remind me, 'She's a warrior.' Oh yeah, right, I'm a warrior!".

Retrieved from "https://dcau.fandom.com/wiki/Maria_Canals?oldid=175461"
Community content is available under CC-BY-SA unless otherwise noted.