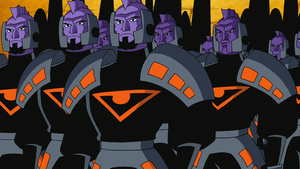 The Legion of the Third Eye were the forces of Kalanor loyal to Despero.

Despero gave the Legion troops access to the Flame of Py'tar, which enhanced their abilities and made them practically unstoppable.

After the Py'tar reverted to its original arboreal form, those soldiers still imbued with the Flame turned to trees.

Retrieved from "https://dcau.fandom.com/wiki/Legion_of_the_Third_Eye?oldid=176420"
Community content is available under CC-BY-SA unless otherwise noted.