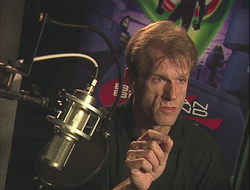 Kevin Conroy (born November 30, 1955 in Westbury, New York) is a prolific actor most famous in the DCAU for providing the voice of Batman/Bruce Wayne.

Retrieved from "https://dcau.fandom.com/wiki/Kevin_Conroy?oldid=191099"
Community content is available under CC-BY-SA unless otherwise noted.