We are what you made us.

Freon, real name Mary Michaels, was the only female member of the Terrific Trio.

Mary Michaels was Mike Morgan's fiancée until the day she was exposed to the radiation that turned her into a gaseous, freezing being. Together with her teammates, Mary adopted a new moniker and joined the government-sponsored team, "The Terrific Trio".

When the Trio learned that Dr. Hodges was behind the accident, in an attempt to pry Mary from Morgan, Freon spurned him and the team decided to punish him accordingly. At that point, Batman engaged the team and activated a ventilation system, which pulled Freon in, seemingly killing her in her genetically unstable condition.

Trapped in a gaseous form, Freon was able to fly, had a freezing touch and could emit freezing blasts.

Freon seems to be based on the Fantastic Four member Invisible Woman. She also seems to be the opposite of her counterpart's brother, fellow teammate the Human Torch, seeing as he can fly and has fire-based powers. 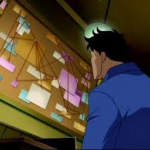