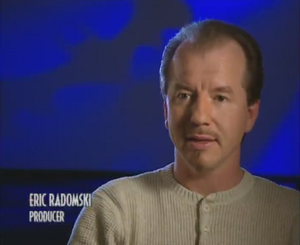 Eric Radomski served as the co-creator and co-producer of Batman: The Animated Series along with Bruce Timm. He was known for his definitive style of background painting, specifically painting backgrounds on black paper to give Batman: The Animated Series a darker look and feel. He left Warner Bros. after a successful tenure, but later returned to join the production team for shows such as Xiaolin Showdown and Shaggy & Scooby-Doo Get a Clue!

Retrieved from "https://dcau.fandom.com/wiki/Eric_Radomski?oldid=195496"
Community content is available under CC-BY-SA unless otherwise noted.