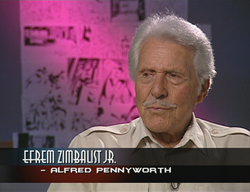 Efrem Zimbalist, Jr. (born November 30, 1918 in New York, New York - May 2, 2014 in Solvang, California) was the voice talent behind Alfred Pennyworth beginning with Batman: The Animated Series and continued through Justice League. He is the father of Stephanie Zimbalist. Coincidentally, he shares a birthday with Kevin Conroy, the voice of Batman. Zimbalist died on May 2, 2014 from natural causes at the age of 95.

Zimbalist's most famous roles are that of private investigator Stuart Bailey on 77 Sunset Strip, and Inspector Lewis Erskine in the television series The F.B.I.. This role was referenced in the 1989 Secret Origins of the World's Greatest Superheroes story "The Man Who Falls", when Bruce tried out for the FBI, but was rejected because he was a bad shot. In addition to doing the voice of Alfred on Batman: The Animated Series, he played the villain Dr. Octopus in the 1994 animated series Spider-Man. In a fitting twist, he also starred in the 1990 live-action Zorro television series as Don Alejandro de la Vega - the father of the titular character who served as an inspiration for Batman’s creation.