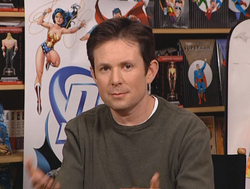 David Kaufman (born July 23, 1961 in St. Louis, Missouri) is an American actor. He was the voice of Jimmy Olsen and also served as host on the roundtable Behind the Cape. He reprised his role as Jimmy in the DC Universe Animated Original Movies, Justice League: Doom and Superman vs The Elite.

Kaufman began acting at a young age in his hometown of St. Louis, Missouri, when his kindergarten teacher handed him the plum lead role of Santa Claus in the class Christmas play.

At the age of 18, Kaufman set out from St. Louis, Missouri to attend UCLA's Department of Theater Arts. Since that time, Kaufman has studied and worked extensively as a professional actor in films and television.

Retrieved from "https://dcau.fandom.com/wiki/David_Kaufman?oldid=189769"
Community content is available under CC-BY-SA unless otherwise noted.