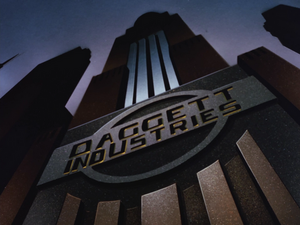 Daggett Industries, also known as the Daggett Development Corporation and Daggett Labs, was the company of Roland Daggett. Daggett's business empire included laboratories focused on developing pharmaceuticals,[1] chemicals, and biological products,[2] as well as real estate and land development.[3] Daggett Industries, although nominally legitimate, employed various illegal and unethical means against its primary competitor Wayne Enterprises, including a failed attempt to frame Bruce Wayne for insider trading in an effort to cover up safety concerns about its Renuyu facial cream.[1]

After Renuyu was tested on actor Matt Hagen in an attempt to restore his prior appearance after an accident deformed his face, Daggett used Hagen's ensuing addiction to his product in order to force Hagen to carry out various crimes on his company's behalf. Renuyu's terrible addictive side-effects and the botched attempt to murder Hagen in a coverup of the scandal were responsible for Hagen's transformation into the villain Clayface.[1]

A Daggett Industries subsidiary, the Daggett Development Corporation, was implicated in a failed attempt to detonate explosives in the Crime Alley district of Gotham in a plot to redevelop the land at a considerable profit. Once again, Daggett's plans were frustrated by Batman.[3]

Daggett Labs later employed the unscrupulous scientist Dr. Milo, who created a highly virulent virus he intended to spread to the people of Gotham City by infecting stray animals. Daggett planned to allow the virus to spread before selling the antidote at an exorbitant price, but his scheme was foiled by Batman and Catwoman.[2] The failure of this gambit left Daggett in considerable debt.[4]

Retrieved from "https://dcau.fandom.com/wiki/Daggett_Industries?oldid=182811"
Community content is available under CC-BY-SA unless otherwise noted.