the premier DC Animated Universe database that you can edit.
We are currently editing 3,770 articles since May 2005.
Are you new? Go here to get started!
This wiki contains spoilers, read at your own risk.
About this wiki • Administrators • Forum • Help
New Pages • Recent Changes • Policies • Manual of Style 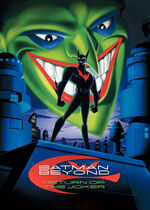 While the feature is quite popular among DCAU fans, many of whom cite it as the animated universe's storytelling apotheosis, its release was plagued by controversy. Scenes dubbed too intense for young audiences were altered or outright removed from the film's first incarnation, in some cases drastically changing the mood of a scene, and when fan unrest led to an uncut version being released over a year later, it was given a PG-13 rating. (Read more...)

This particular image has been randomly selected from our database. Every time you visit us, you will see a new image here. For more information about it, click directly on the image.
If you wish to see a different one, click here. Enjoy!
Did You Know…
(See full list...)
DCAU Hall of Fame
Batman

Retrieved from "https://dcau.fandom.com/wiki/DCAU_Wiki?oldid=200415"
Community content is available under CC-BY-SA unless otherwise noted.