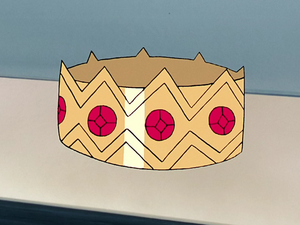 The Crown of Tikal was a Latin American relic.

The ruby-studded golden crown of Tikal, with an estimated value of about 40 million dollars, was stolen from a museum in Mexico City in the late 2030s. It ended up in Paxton Powers' private collection of illegal art.

When he was kidnapped by King, he offered the crown as a way to pay off his ransom, as he had no liquid assets. When he realized Bruce Wayne would tip off the authorities to his collection, he offered it as a payment for the murder of Wayne instead.

Retrieved from "https://dcau.fandom.com/wiki/Crown_of_Tikal?oldid=175600"
Community content is available under CC-BY-SA unless otherwise noted.