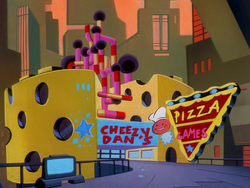 Beside pizza, Cheezy Dan's also offered a wide array of arcade games. It was a frequent hangout for Terry McGinnis, Max Gibson, Corey Cavalieri, Dana Tan, Matt McGinnis and a lot of people their age.

The concept of pizza and arcade games is based on Chuck E. Cheese's. Founded by Atari founder Nolan Bushnell, the restaurant offered animatronic shows, arcade games and carnival rides along with pizza and other foods. Parodies of the restaurant, some more extreme than Cheezy Dan's, have appeared in several television shows, including The Simpsons, Kim Possible and Toon Adventures Tiny Toon Adventures.

Retrieved from "https://dcau.fandom.com/wiki/Cheezy_Dan%27s?oldid=175523"
Community content is available under CC-BY-SA unless otherwise noted.