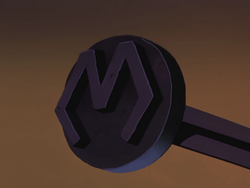 The Branding iron was a highly sought-after magical item.

The branding iron was created by Morgaine Le Fay. It had the ability to separate the demon Etrigan and its host, Jason Blood. It could also enthrall any being branded by it.

Klarion and Blood bid it at an auction, but Bruce Wayne outbid them both. Bruce gave it to his old friend Blood, but Klarion had his cat Teekl steal it for him . He then used it to its full purpose, and used the demon to wreak havoc and mischief through Gotham City.

Retrieved from "https://dcau.fandom.com/wiki/Branding_iron?oldid=175413"
Community content is available under CC-BY-SA unless otherwise noted.