See Batman (disambiguation) for other uses of the word "Batman".

Batman: Rise of Sin Tzu is an action-adventure video game that was released in 2003 for the PlayStation 2, Nintendo GameCube, and Xbox consoles. It was developed and published by Ubisoft in conjunction with Warner Bros. Interactive Entertainment and DC Comics. It is based on DC Comics' character Batman and the television series The New Batman Adventures.

Batman faces a new enemy unlike any he has faced before. This mysterious foe plunges Gotham City into chaos on the night of the anniversary of Bruce Wayne's parents murder. Apart from Sin Tzu, other Batman villains featured in the game are the Scarecrow, Clayface, and Bane. Batman is aided in his quest to save Gotham by Robin, Batgirl, and Nightwing.

The bulk of the game has the player battling groups of enemies in the style of games like Battletoads and Double Dragon.

The story mode, which forms the bulk of the game, can be played either alone or cooperatively, and rewards players for completing levels not only by continuing the story, but also with an upgrades system. This allows players to purchase new moves for their character and other game bonuses. There is also a challenge mode in which players (either cooperatively or competitively) take on groups of thugs without a storyline.

The game is played under a very strict time limit, which can be too difficult for first time players even under the 'normal' difficulty setting. The action is fairly hectic, and even when playing cooperatively, players are usually outnumbered by the number of enemies on screen.

One of the main draws to the game was that it introduced a new character into the Batman universe, as the cartoon did with Harley Quinn. This new character, Sin Tzu, was created by comics legend Jim Lee. However, Sin Tzu did not gain popularity as a character and was never to be seen again in any media, with the exception of the game's novelization. The game shipped in regular versions with just the game, and boxed special editions that came with action figures for the Xbox and PS2 versions, and a lithograph with the GameCube version.

Despite the publicity placed on the game, many critics found the beat 'em up gameplay repetitive and found the entire game to be without the depth of story, gameplay, and mood found in Ubisoft's previous game adaptation of The New Batman Adventures, the popular Batman: Vengeance. Game Informer reviewed this game and gave it a 5/10.

To help raise even more publicity, a novel based on the game with the same name was released around the same time of the games release date. The novel, written by Devin Grayson and Flint Dille (who wrote the game's script) was told in the first person, with Clayface, Scarecrow, a Stonegate Penitentiary inmate named Freddie Galan, Bane, a Hispanic thug named Ramon Domingo, Sin Tzu, Batman, Batgirl, Robin, Nightwing, and Alfred each providing the narrative at different points.

Four villains had a short cameo appearance in the game (without a speaking role). They are unlockable 3D Models in the Trophy Room. Incidentally, these four villains are the same ones Batman had to face in Batman: Vengeance. 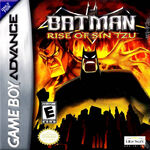 A novel based on the game with the same name was released around the same time of the games release date.

Retrieved from "https://dcau.fandom.com/wiki/Batman:_Rise_of_Sin_Tzu?oldid=190650"
Community content is available under CC-BY-SA unless otherwise noted.