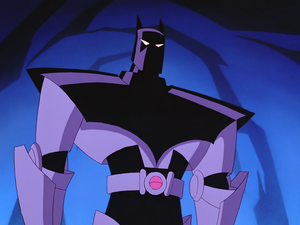 The Bat Armor was an experimental exosuit built by Bruce Wayne to compensate for his physical limitations as he got older, beyond what the last Batsuit could do.

After finally convincing Bruce to show him around the Batcave, Terry McGinnis asked him about the armor. Bruce explained that it amplifies effort and increases endurance. It was intended as a final effort to make up for his old age, but during testing he discovered that the suit was straining his heart. Terry expressed his disbelief that Bruce would let a heart problem stop him. Later on, Terry was kidnapped by villainess Inque, who had been in the cave and knew Terry had an "old man" helping him. Inque used the communicator in Terry's cowl to tell Bruce she would kill him if he didn't give himself up. Bruce arrived covered in a trenchcoat and wearing a scarf and sunglasses to cover his face. After Inque attacked him, Bruce activated the Bat Armor and its parts slid into place around him, allowing him to fight as Batman once more. The fight allowed Terry to break free and use a Batarang to break the skylight and let the rain wash Inque away.

Retrieved from "https://dcau.fandom.com/wiki/Bat_Armor?oldid=187920"
Community content is available under CC-BY-SA unless otherwise noted.